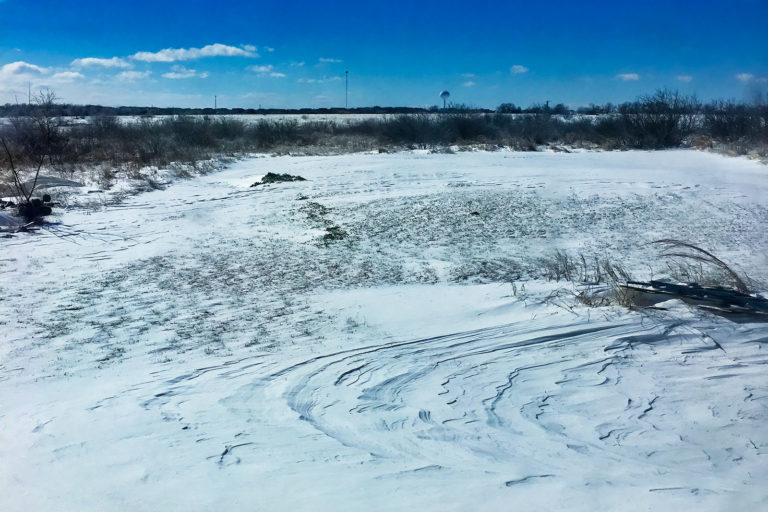 When my cover artist showed me her snowy concept for my Christmas mystery, Birth of the Black Orchids, my first thought was that it’s about a Texas Christmas, with brown ground and bare trees. Then I remembered February 2021, shown in the photograph from my window.

I saw snow the first time as a five-year-old in Texas. School was out for a severe weather day, the first in my short memory. The ground turned white, so pretty and smooth. I was mad when people and cars messed it up. By the next day, the snow was melted, the ground was clear again, and we went back to school.

The Valentine’s Day storm of 2021 was different.

On Monday, the power went out for 8 hours, but that was okay because we have uninterruptible power supplies.

However, both UPS batteries were dead. But we still had running water and plenty of uncooked food. When the rolling blackouts took effect—30 minutes of power on, then off—we could microwave! Overall, the rolling blackout was great: it preserved food, kept devices charged, and kept house temperatures livable, if you stayed in one room while wearing heavy clothing and fleece socks)

On Tuesday the water went out, but that was okay because we had snow to melt and bottled water to drink. We still had internet, so I could still work.

On Wednesday we learned from the water company that they’re also affected by the power losses, and so they’re rotating water service among their customers. We’ve already had our turn, but at least we don’t have broken pipes (probably). Our house is built of Structural Insulated Panels, which kept the pipes intact and the house temperature at 60 degrees. Other houses were 40 degrees and lower.

Then the Wi-Fi router died, for no adequately explained reason. But that’s okay, because I still have my cellphone. Wait, why does it have only two bars? Like the electrical power, we now have internet occasionally.

By Thursday I’m worried because there aren’t that many systems left to fail. My spouse’s cell phone and our cordless phone went out two weeks ago, and we ordered replacements. Tracking shows they’re at the main Austin post office, but the mail is not being delivered. So our contact with the outside world totally depends on this one ancient cellphone with a two-bar signal, because I’m not sure we can get out of our driveway, even if the fluids in the car aren’t frozen. The status of the surrounding country roads is uncertain too, though it doesn’t matter because my backup plans of going to a Red Roof Inn (because they accept pets for free) or staying with friends won’t work because everyone is in the same boat. We’d have to drive 9 hours to Arizona, and I’m not sure about Arizona either.

But then, amid all this worrying, comes a faint, flickering hope. Can it be? The power has been on longer than a half hour. And it hasn’t gone out since. Now we can boil snow!

We made the last snow harvest on Saturday morning. It was a good crop, with slushy snow packing deep into the buckets and huge, murderous icicles from the roof. By afternoon, it’s 70 degrees, and I put on shorts and sandals as I count buckets and bottles: We have 10-14 days supply of water, and I’m thinking we’ll make it.

And the next time I flip on the faucet, water spurts out—ugly, brown, smelly, must-be-boiled water, but definitey wet water.

By Sunday everything is restored, but I still have to get a new router. It might be easier to fix the Texas power grid.